Many technologies fall down to obscurity only to be rediscovered later. This is especially true for IT technologies where concepts are thought of well before time, but the supporting infrastructure is simply not there yet. One of these is the Opera Platform from the Norwegian company Opera.

The Opera Platform was a layer for mobile devices built with web technologies like HTML, JavaScript and CSS. The Norwegian browser vendor released it way back in 2005 and just looking at the devices devices in the marketing material makes you cringe: 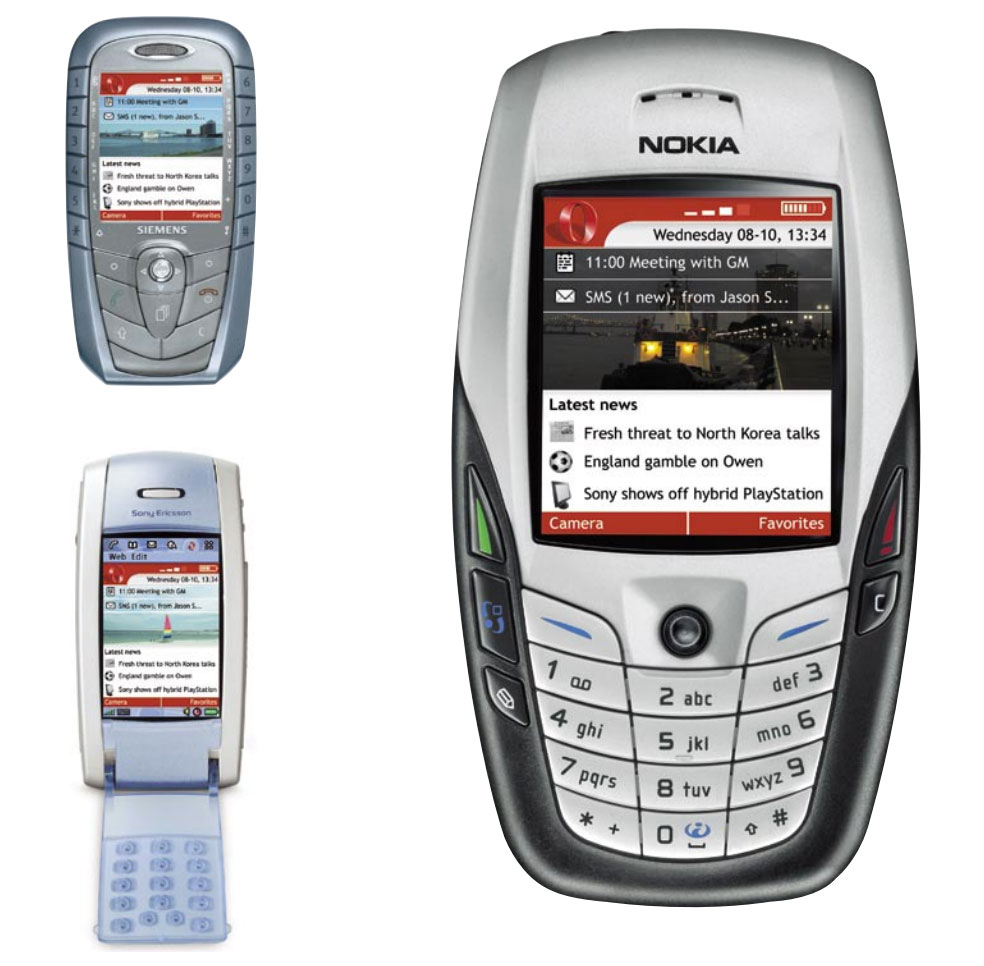 Obviously what makes this platform very different from that time is that it was built using web technologies. This was before the ecosystem and capabilities that JavaScript has today with React Native, etc. It was actually ahead of the iPhone launch for a few two good years.

In 2005 Mobile Operators were still at the helm of the experience that handset users had. This is why Opera Platform was mostly marketed as a tool to customize the phone's homescreen using web technologies. It promised being able to seamlessly integrate online content and local handset applications, offering a fast time to market.

With Opera's high performance and fully featured (for the time) JavaScript engine embedded in the platform, developers could use the same skills as they used to develop for the web with the documentation promising for powerful W3C standards such as HTML, CSS, JavaScript and DOM.

And in technical terms the architectural diagram of Opera Platform looks very familiar to developers today:

Integration with the native platform was done with the embedded JavaScript engine that could be extended with new classes and methods implemented in native code. This allowed communication between the native platform low level functionalities such as mobile network signal level information as well as battery level details.

What happened to Opera Platform?

Without any insider knowledge it's impossible to know what actually happened to Opera Platform. Likely it was simply not very compelling in practise on 2005 hardware and thus was left playing second fiddle at Opera seeing success with Opera Mini.

The Opera Platform was definitely a forerunner as Mozilla launched their web technology powered FirefoxOS smart phone operating system in 2013. The project was shutdown only two years later in 2015. FirefoxOS was very raw at launch and too late to the market mature with iOS and Android offering fluent experiences written in lower level languages like Java and ObjectiveC.

The great thing is that even though the Opera Platform fell into obscurity and the company itself seeing major changes, the spiritial successors continues to live on. The web platform is more ubiquitous than ever.

Many members who worked on the original project have since moved on to work on Vivaldi, a browser that heavily builds on web technologies and JavaScript like React.js and Node.js.

« Why is Google working on Angular and Polymer? - Keystone.js is the best Node.js alternative to WordPress »