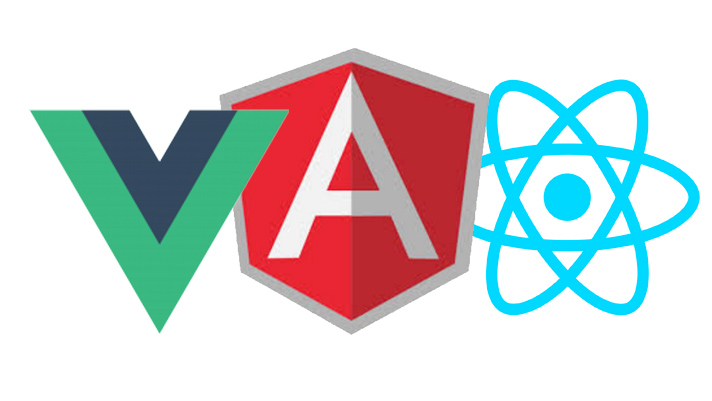 Angular was the winner of the two-way databinding war on the client side. Other options like Knockout have effectively been erased from the public mindset. Angular is currently the most popular way of creating SPA (Single Page Applications), largely due to the simplicity of use. Angular includes everything for development.

The largest issue with Angular is that the performance can degrade quite easily. Angular is undergoing an effort to be rewritten in TypeScript and will be reborn as Angular 2, which will improve performance but will also be quite different from Angular 1.x.

Angular.js is the WordPress of the bunch: Very easy to use, but technically not that elegant.

UPDATE: Angular 2 has grown up and is now more modern: Choosing between React vs. Angular 2

React is the most simplistic of the options. In itself React only worries about the view of the application and leaves state and other tasks for the user to care. Currently it is used widely with different Flux pattern implementations like Redux.

The greatest advertised benefit of React.js is pure performance, thanks to it's virtual DOM and the real-world requirements at Facebook (the original developer) the tool is the gold standard for blazing fast user interfaces on the web.

React.js is the Drupal of the bunch: Very powerful, but minimalistic and dangerous in the wrong hands.

Vue is the new-comer and aims to merge the best bits of Angular and React: It aims to be performant and a complete, easy to use package. It's been gaining some momentum as Pagekit and other projects have picked it up.

The greatest benefit of Vue is it's lack of pedigree. It is new and has little baggage. It has been able to learn from the mistakes and successes of Angular and React. Vue adoption in the long term remains a question mark as the world of JavaScript remains very volatile.

Vue.js is the Grav of the bunch: It has plenty of promise, but the long term prospects are uncertain

UPDATE: Vue.js has been selected by Laravel as the default framework and the Vue.js 2.0 en route